If you wanted to sum it up in one single word, it would be comprehensiveness.

Ibn Khaldun wrote centuries ago that what in other languages require separate words, in Arabic it is communicated through vowels, patterns, and grammatical structures (non words).

The way in which the words are connected together gives you more meaning than what you started off with.

Here's the bottom line: In the Arabic language the majority or meanings do not come from words. They come from vowels, patterns and grammatical structures.

It is my goal for you that by the time we're done, you will have a crystal clear understanding of what it means for meanings to come from patterns. (vowels and grammatical structures will be dealt with in later articles).

Meanings That Come From Patterns

There are 28 letters in the Arabic alphabet. You can see them below:

The words are constructed by grouping the letters from the alphabet into three. Every group of three has an associated meaning. So:

But the consonants on their own are not pronounceable. If you take ك [kaaf] – ت [taa] – ب [baa] and try to pronounce it, you would not be able to. Therefore we need vowels. The vowels:

We will highlight this on the next slide using our particular example: 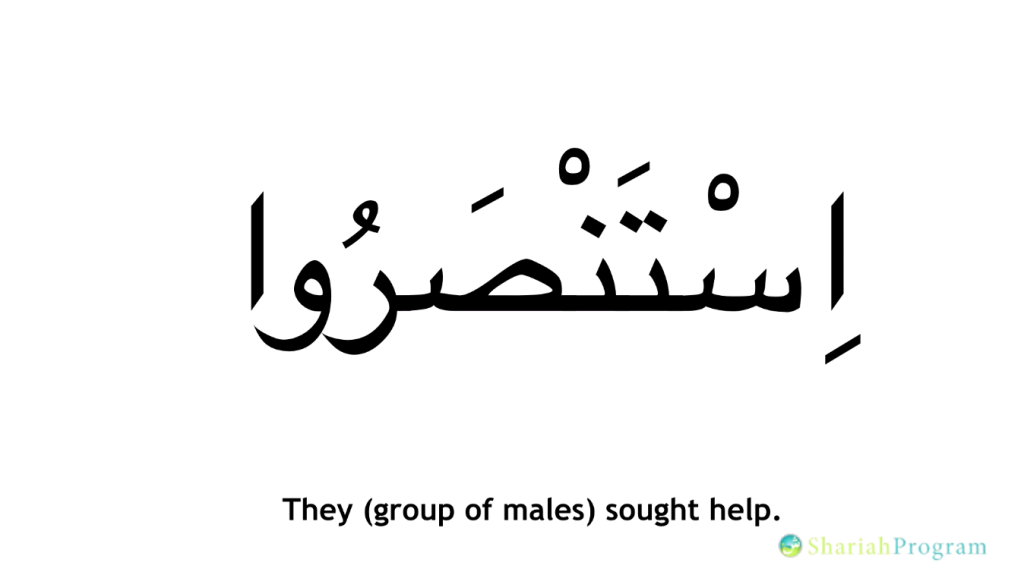 What you see here, looks like a single word, but it is actually a full sentence. In English it translates to “They (group of males) sought help”.

How many meanings are there? In English, they need three words to communicate it. (1) they (2) sought (3) help. But the actual meanings are more than three. Let’s dissect this and dive in!

Where is that coming from? 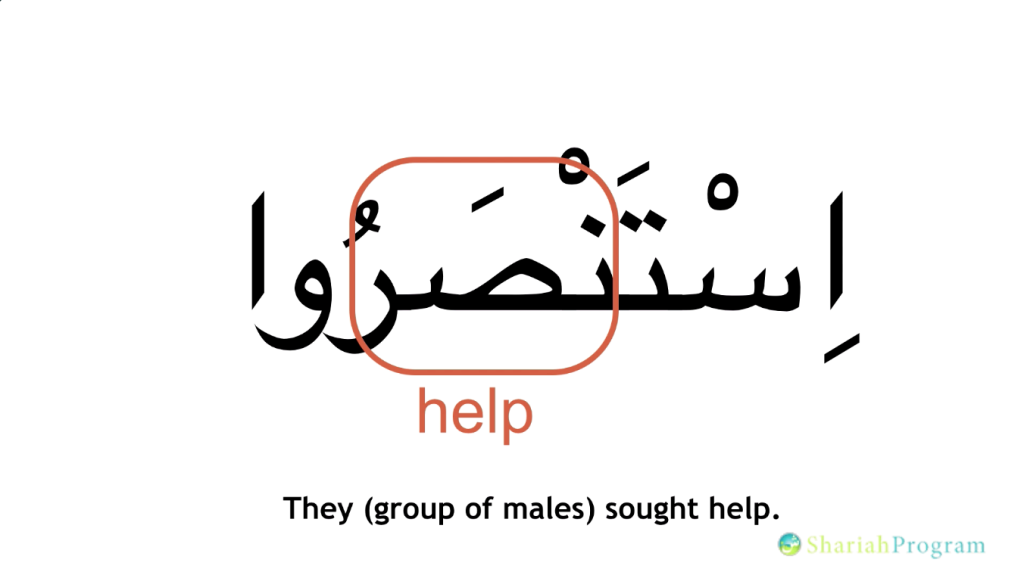 It is coming from the particularness of the three consonants used in the middle: ن [nun] – ص [saad] – ر [raa]. Because if I leave everything else the way it is, and I switch those three letters and I put ط [Taa] – ع [‘ayn] – م [meem] (which are the three letters of “food”), then the translation changes, and instead of “they sought help”, it becomes “they sought food”. The word is اِسْتَطْعَمُوا. Notice how it rhymes.

That is coming from the س [seen] and ت [taa] at the front. 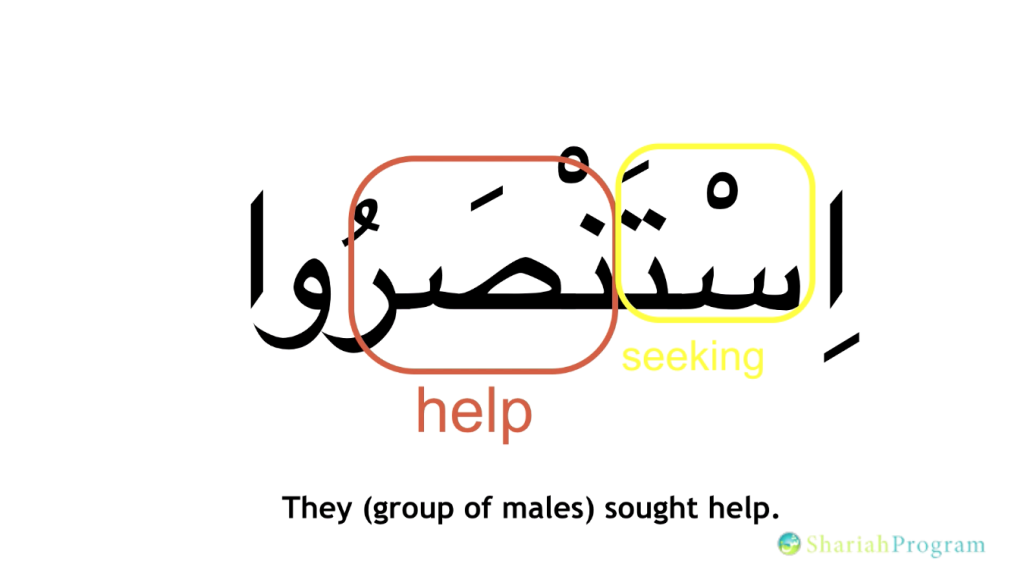 If I remove the س [seen] and ت [taa] and I say only نَصَرُوا, then the translation is “they helped”. The “they” part stays the same. The “help” is still there. The “seeking” disappears.

The ا [hamzah] at the front is there to enable pronunciation. I am not going into it for the sake of time.

What we have translates as “they sought help”, it could have been “they are seeking help”, or “they will seek help. Where is this past tense coming from? 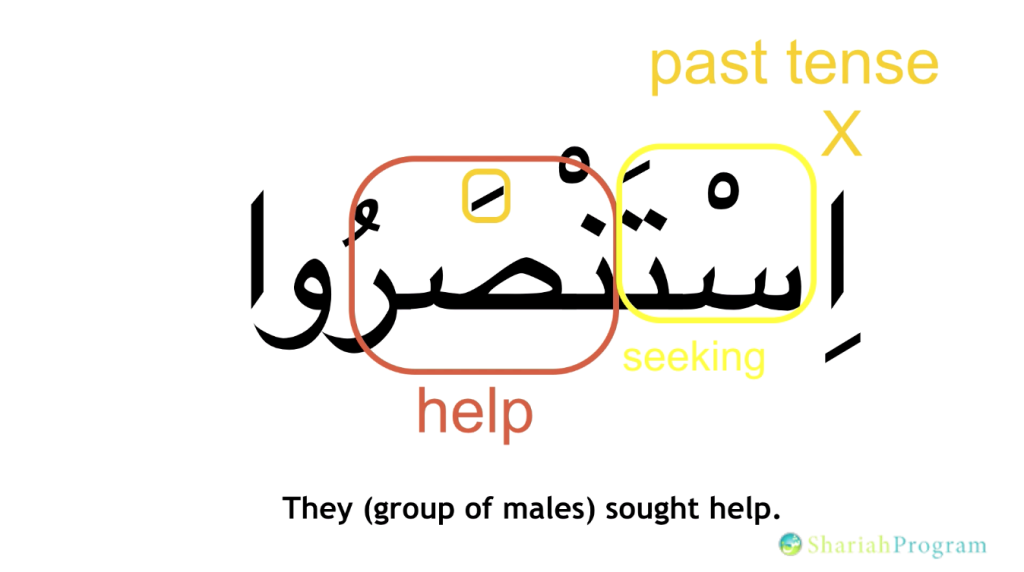 The answer to that is it's coming from:

The active voice is coming from pure vowels because what we have is اِسْتَنْصَـــــرُوا (they sought help). If it was three other vowels, a different configuration. Everything else would stay the same, and the translation would become passive voice: “help was sought from them”. 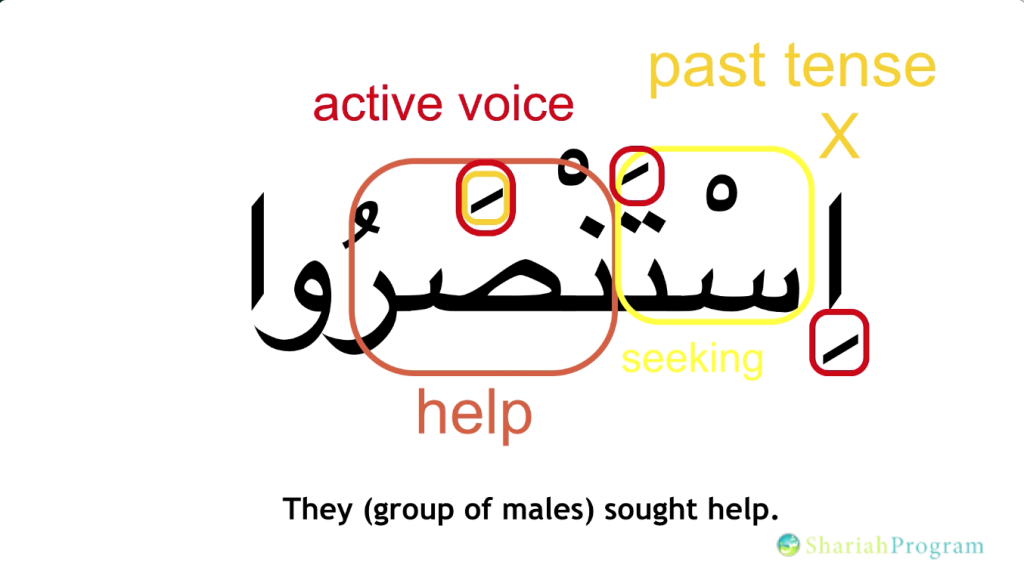 Again, I don’t need to tell you exactly what the configuration for the passive is.

The point is that what we have is different from the passive configuration. The topic will be taught at a more appropriate time.

We are talking about them. We are not saying “you sought help” or “we sought help”. There are other ways of doing those. This is masculine, plural third person. All 3 of these final meanings are coming from the و at the end 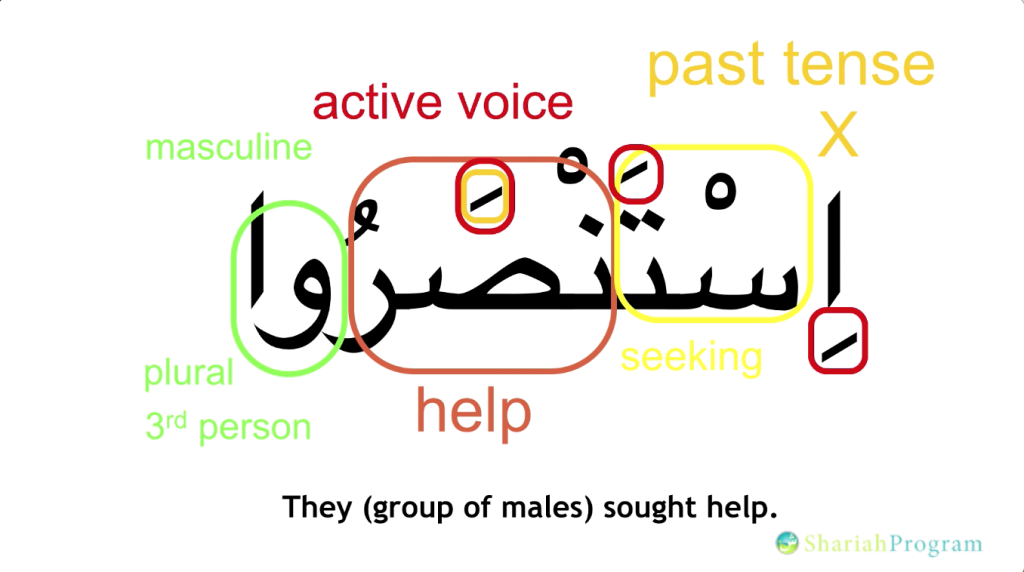 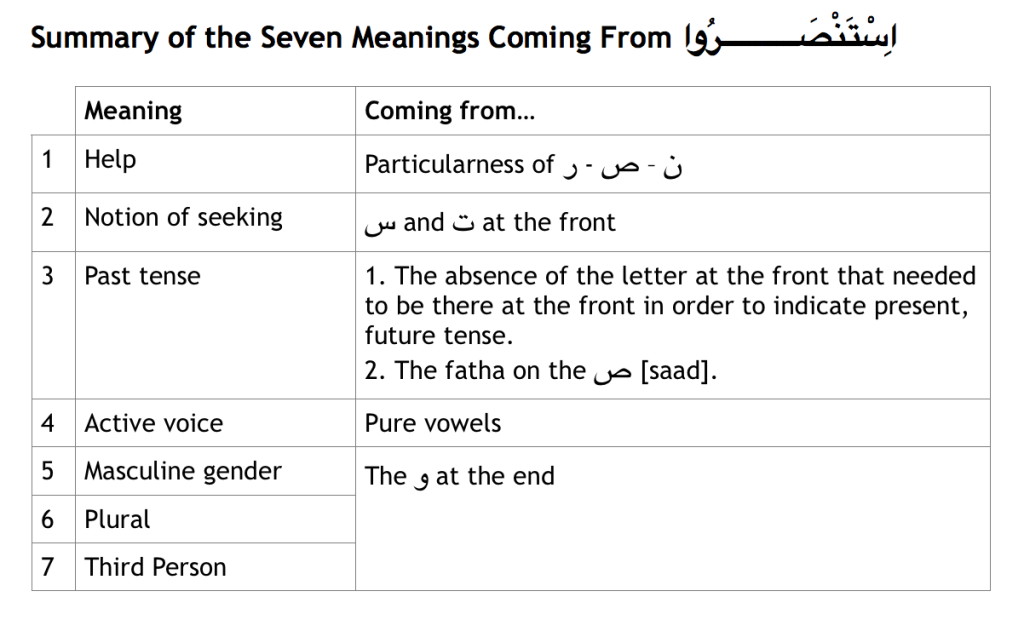 What you are seeing here is mind blowing! It is the height of comprehensiveness. In English, they tried to do it, but couldn’t. They needed three words, even then it wasn’t precise. Because “they” in English does not distinguish between males and females. Whereas in our اِسْتَنْصَـــــــــــرُوا example there is a distinction between males and females, because if it was females it would have been different.

This is what the prophet ﷺ meant when he said: 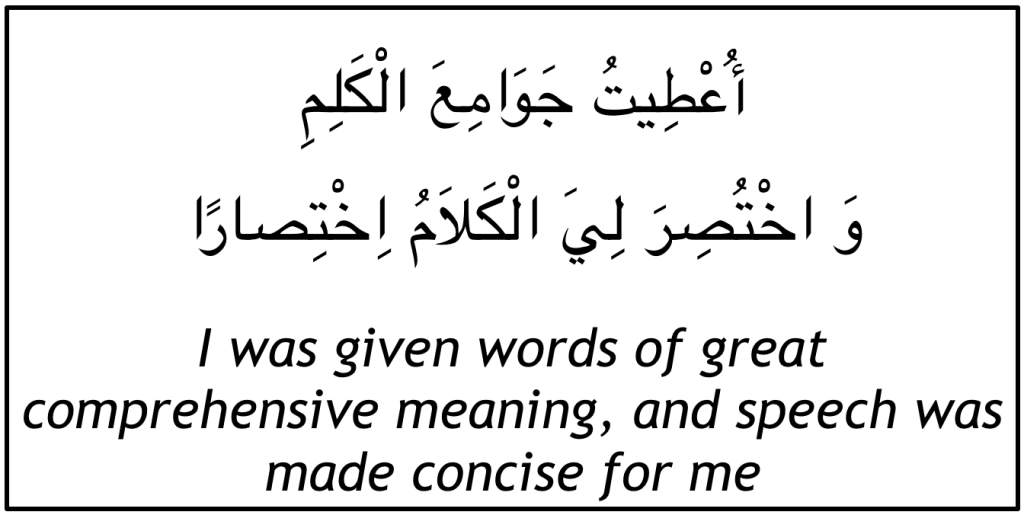 Now that we've come to the end of this blog post, hopefully you can see how in the Arabic language, truly the majority of meanings do not come from words. They come from vowels, patterns and grammatical structures. Just in the one اِسْتَنْصَـــــــــــرُوا example there were 7 meanings coming out form what looked like a single word. Only one of those meanings was coming from the dictionary. The other 6 meanings were either coming from the pattern, or from the end و [waaw].

This is huge, and it is pervasive. It does not just exist in verbs, but it exists at the sentence level also.

If you feel like this article was helpful, you are a great fit for the free How To Start Understanding Quranic Arabic In 21 Days mini-class I put together for those that are looking to explore more and more of this mechanism that governs the conveyance of non-word meanings.

This training is packed with information and 100% Free.

Sign up now by clicking the banner below and filling the short form.

May Allah reward you for the best of your intentions and grant you barakah in your time and effort.